Me Before You by Jojo Moyles - an Unforgetable Read 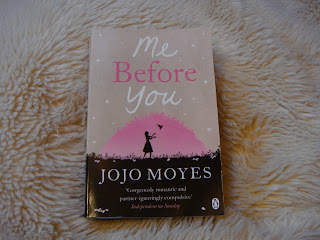 I've just finished Me Before You by Jojo Moyes, and I don't think that I've ever been moved so much by a story.
Louisa Clark is literally a small town girl who loses her job and goes to work for the Traynor family to help look after their son, Will, who has been injured in a road accident and is now a quadriplegic.
The last book I read by Jojo Moyes was The Last Letter From Your Lover, and in it she got totally into the character of Jennifer Stirling who is struggling in the stifling early 1960s to come to terms with her feelings for another man.
In this book, she is totally into Louisa's character. A girl from a relatively poor home, but full of love, who has to come to terms with a rich, yet undemonstrative family.
I also love Will's character. For example, instead of calling her Louisa, her calls her Clark, rather like Daniel Cleaver in Bridget Jones's Diary. A really nice touch.
Of course,  I've been reading this whilst the Paralympics have been on which has made the story all the more  poignant.
I can't go into it too much here, but can only say, read it as soon as you can.
Posted by Jean Bull at 19:52

Email ThisBlogThis!Share to TwitterShare to FacebookShare to Pinterest
Labels: 'Bridget Jones's Diary', 'Jojo Moyes', 'Me Before You', 'The Last Letter from your Lover', Paralympics