My Dear, I wanted to tell you by Louisa Young - Kindle or paperback? 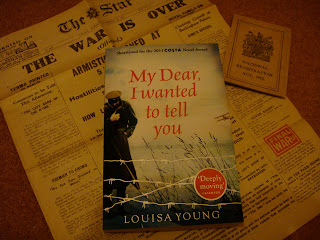 I had a Kindle for Christmas, and I've been very disappointed that many new books for sale are more expensive to download than to order the paperback and have it delivered to my home. Of course you do get your ebook immediately, but there is another thing. . . 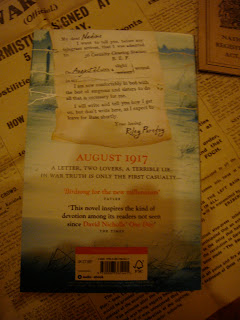 I first saw Louisa Young's beautiful book in Sainsbury's. I was drawn to it by the cover which sets the story in the First World War which I'm researching at the moment. (Someone, giving an Amazon Customer Review, said that the cover was 'reminiscent of yet another beach chick-flick read' - I don't know what they were looking at!)
The back of the cover is important too, and gives, of course, the blurb, but this one is very special because it explains the title: the words on the buff coloured form that would be filled in at a Casualty Clearing Station, 'My Dear . . . I wanted to tell you. . .' which you don't find out until halfway through the book.
This is all lost when you download it on Kindle.
Also, I looked at the first few pages on Amazon, and the formatting is all lost as well. Louisa Young sets the scene in the Prologue by describing the sounds and effects of the Battle of Messines on both sides of the Channel on the main protagonists of the story. All  the gaps between the paragraphs are lost and they all run into each other. Not what Lousia had intended, I'm sure.
Anyway, enough of all that, I really enjoyed this book. The contrasting love affairs between Riley and Nadine, and that of his commanding officer, Peter, and his wife, Julia, and the support which Rose, Peter's sister, gives to them all, are set against the horrific backdrop of the First World War. This is a moving story about how ordinary people coped with their lives during that time.
So, as you can see, I bought the paperback.
Which would you prefer?

Email ThisBlogThis!Share to TwitterShare to FacebookShare to Pinterest
Labels: 'Battle of Messines', 'First World War', 'Louisa Young', 'My dear, I wanted to tell you', Kindle