I've found a Weekend at Bernie's! 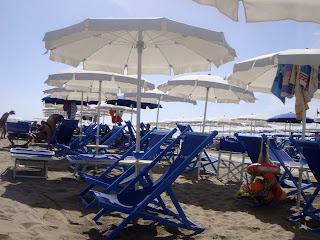 Many years ago we watched this black slapstick comedy film about two guys who discovered that their boss had been murdered at his beach house, and not wanting to be accused of his death and not wanting the assassin to kill them too, they pretended that he was still alive. Sounds gruesome? Well, it is a bit, but played so well that it's just funny, unlike some American comedies that go completely over the top.
As Bernie's beach house fills up with his normal weekend party crowd, Larry and Richard sit him on the sofa, and with his dark glasses on. Who can tell he's dead as they swing his arms and legs and pretend that he's interacting with all the guests?  There are some great set pieces, e.g. when Larry and Gwen, the girl he's trying to impress, lie on the beach like Burt Lancaster and Deborah Kerr in From Here to Eternity, and Bernie, who has fallen off the balcony and been swept out to sea, floats up behind them on the tide, like a scene from The Simpsons.
Anyway, we'd talked about it for a long time, but couldn't remember the title, so it was great to see that it was on ITV 2 on Saturday night. A silly funny film that made us laugh.
Have you seen it?
Posted by Jean Bull at 08:22

Email ThisBlogThis!Share to TwitterShare to FacebookShare to Pinterest
Labels: 'Burt Lancaster', 'Deborah Kerr' 'From Here to Eternity', 'The Simpsons', 'Weekend at Bernie's'