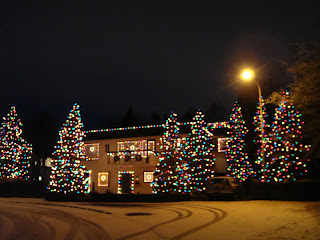 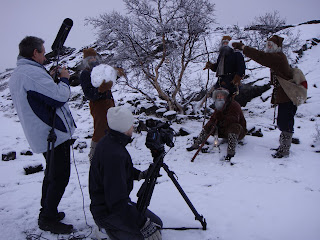 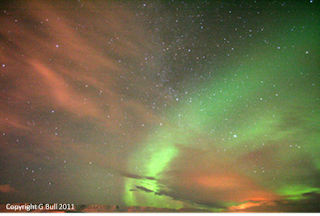 The temperature in Akureyri last week was minus 22 degrees, that's colder than the freezer in my kitchen! Luckily, when we were there the week before, it was only minus 2, a much better temperature to go hunting for the Northern Lights!
The snowfall made it feel very Christmassy, together with the fact that the local householders had already put up their Christmas lights to counteract the long winter nights.
On the first evening we drove about 100 miles on an included tour to find the Aurora Borealis, but we only saw a smudge in the sky. Happily, that meant that we could go out again the next night to try and find them again.
On the second day we took a minibus tour to Lake Myvatn to see the volcanic landscapes highlighted by the snow: pseudo-craters made by trapped water bubbling up, rather than lava; stacks of lava; geothermal pools where some of our party bathed - not me, it was snowing; sulphur fields; and mystic Dimmuborgir, home of the trolls. Harry, our driver on the first night, had told us how Iceland has not one, but thirteen Santas. They come on each of the thirteen nights before Christmas. Children put a shoe on their windowsill, and if they are good they get a treat, but if they are bad, they get a potato!
Rabbi, our guide on the second day, also told us the story, but I don't know whether he expected to see some of the Yule Lads, as they are called, at the cafe at Dimmuborgir! They were filming an advert for the Icelandic Tourist Board, and completely in character, fooled around like The Monkees or The Goodies whilst we had our lunch. Then when we moved on to the fissure where Iceland is splitting apart with the Eurasian plate pulling east and the American plate pulling west, we saw them again. It was like going to Lapland and seeing Father Christmas, only better because it wasn't at all commercialised, and felt very real.
At last the second evening arrived, and we went out again with Harri. We had only been going about 15 minutes when a lady in the back of the minibus pointed to a shimmering line of green in the sky, and said, 'Is that them?'
'Yes!' said our driver, finding a place to park.
We spent about an hour photographing the breathtaking Aurora Borealis which spread across the heavens. Keen photographers set up their tripods, and experimented with long exposures, but it was also good to lean back on the bonnet of the van and just look up at the sky and marvel.
It was a really magic trip and I would definitely return to Iceland, but maybe in the summer next time!
Icelandair Northern Lights Winter Breaks
Posted by Jean Bull at 20:10