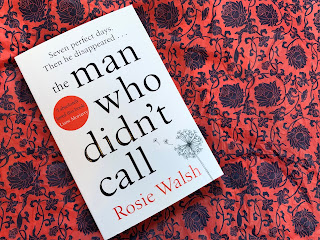 the man who didn't call is the fantastic new novel by Rosie Walsh who has previously written four under the pseudonym of Lucy Robinson.

Sarah met Eddie in Gloucestershire, on a village green, talking to a sheep, on the anniversary of her sister, Hannah's fatal accident.
They spend a perfect, glorious, romantic week together, but he has arranged to go on holiday to Spain with a friend, and she has to go to Leicester, where her grandfather is dangerously ill. They promise to keep in touch because this is something special for both of them.
But he never calls.
She tries to contact him in every way, but there is no reply.
Over the weeks, she does find Alan, the one Eddie was to go on holiday with, but he doesn't know, or won't say where he is, neither does Martin, another friend at his football club.
She begins to think that her obsession might be driving her over the edge, so she confides in her old school friends, Tommy and Jo, and Jenni, who works at Sarah's office in LA.
Who is Eddie? Where is he? What is his secret?
This is a gripping mystery, written in flashbacks to the magical time Sarah and Eddie spent together as her life goes on without him, and includes the letters letters that Sarah wrote to him and her sister, Hannah.
Rosie Walsh grew up in the Cotswolds and the descriptions her of this wonderful Area of Outstanding Natural Beauty are amazing. The characters are believable too, and I found myself thinking about where Eddie was even when I was doing something else. Lastly this book evokes every emotion from laughter to tears. I loved it!
Posted by Jean Bull at 07:00