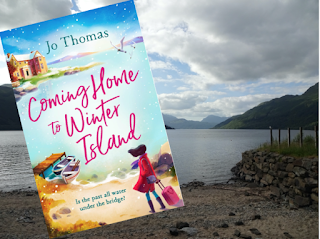 I was captivated right from the beginning of Coming Home to Winter Island,  Jo Thomas' latest novel. It is the story of Ruby Mac, a singer with a band just on the brink of stardom when she loses her voice. Planning to go to Tenerife for Christmas for some rest and recuperation on the advice of her doctor, she receives a phone call from a solicitor, as she's her grandfather's only living relative, asking her to go to a remote Scottish island to sign some papers so her grandfather, who she's never met, can sell his house and go into a care home on the  mainland.
Not letting Joe, her boyfriend and manager, or the rest of the band know what she is doing, she sets off to Scotland, thinking it will only be for a day or two and she can still get to the retreat in Tenerife by Christmas.
However, things turn out to be more complicated. She meets Lachlan, at her grandfather's house, Teach Mhor. He's been living in the attic and looking after Hector, her grandfather, whilst foraging for food over the island for them both and selling his dishes to the local pub.
Hector who is losing his memory spends his time looking in cupboards for something that is lost. This turns out to be the recipe for Teach Mhor's unique gin. Lachlan thinks that if they can find the recipe and distill the gin, they may be able to save Teach Mohr itself.
They have until Candlemas to find it and raise enough money for the care home or Hector's place will be given to someone else.
Will they find the recipe?
Will they raise the money?
Has Ruby found her home on the island?
Will she uncover the family secret that drove Hector and her father apart?
This book is beautifully written, capturing the wild winter on the island, the local community, and the world of Ruby, the singer. It sensitively shows Hector's mental frailty, and the rare moments when he can remember the past and romantically, it shows the growing relationship between Ruby and Lachlan as they fight for Teach Mohr.
Posted by Jean Bull at 07:00