One Winter Morning by Isabelle Broom is her Best Novel Yet! 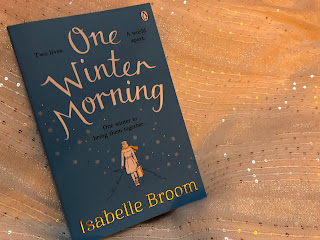 One Winter Morning is Isabelle Broom's best novel yet! It is in turns brilliant, fabulous, engaging, emotional, heart-rending, and beautiful.
Set around Christmas, it's not a traditional Christmas story with turkey, tinsel and mistletoe, because this December, Genie sets off to New Zealand to find her birth mother, Bonnie, but ends up finding much, much more.
It's nearly a year since her adoptive mother, Anna, died on Christmas Eve in an accident on Genie's horse, Sukie. Genie blames herself for the death of the mother she loved so much, and the horse the meant so much to her.  She's spent the last year unable to forgive herself or forget that fateful day. However, when David, her adoptive father, tells Genie that her birth mother is living in New Zealand, she just has to go.
Isabelle Broom's beautiful description of this special country makes you feel that you are really there and adds a deep dimension to the story. Also, the characters are believable and you feel that you really know them and really care how things work out for them.
Apart from New Zealand, being an important background to the novel, there are also the stables both there, and in England, where the horses add another dimension to the storytelling.
This book reminds me of the earlier ones by JoJo Moyes, and Isabelle Broom is proving to be another such accomplished writer.
Posted by Jean Bull at 07:00