Meet Me In Monaco by Hazel Gaynor and Heather Webb - A Beautifully Romantic Novel! 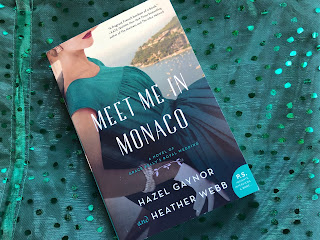 What a fantastic writing partnership! What a fantastic book!
I've read all of Hazel Gaynor's books, and tempted by the story of Princess Grace's wedding, I decided to read Meet Me in Monaco, which she wrote together with award-winning American author, Heather Webb.
The fairytale romance between Hollywood's darling, Grace Kelly, and Prince Rainier of Monaco in the 1950s is mirrored in this book by the one between French parfumier, Sophie Duval, and British photographer, James Henderson, who meet when Grace Kelly ducks into Sophie's shop to avoid the paparazzi; in this case, James, himself.
The whole story is told beautifully, illustrating their emotions with the perfume of the flowers that Sophie grows, and with the eye of a photographer, James.
A clever touch are the articles written by a fictional reporter, Angeline West, from Philadelphia, Grace's home town, which give the point of view of the press to the unfolding events of the romance between the prince and the actress. And Angelina even grows too, with her own story arc.
The novel is written with one chapter in Sophie's words and the other in James', and it deals delicately with their growing love, despite Sophie's rich bullying boyfriend, Lucien, and James' ex-wife, Marjorie, and her rules about him seeing Emily, their daughter.
We all think we know about Grace Kelly marrying Prince Rainier, but Hazel and Heather go behind that film star façade to give us some idea of how that Philadelphia girl really felt.
Also, Grace and Prince Rainier's love affair depended on letters, and so did Sophie and James', in a time when communications were all the more leisurely and written on scented notepaper.
I loved this book. It was beautiful and it was a great pick-me-up as I read it in two days when I was recovering from the 'flu!