Still Me by Jojo Moyes - Louisa Clark Gets a Job in New York! 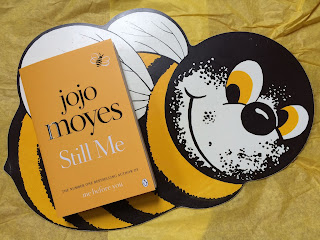 Still Me is Jojo Moyes' third marvellous book about Louisa Clark. You can read my reviews of the others, me before you and after you, here and here.
Louisa wants to prove herself and get over Will Traynor, but will she ever be able to? Nathan, who used to be Will's physio, finds her a chance to work in New York as an assistant to Agnes, Mr Gopnicks's young second wife. Sam, her paramedic boyfriend, encourages her to go  because he doesn't want to curtail her freedom, and anyway, it's only for one year, what could go wrong?
The Gopnicks live in a wonderful Fifth Avenue apartment in the Lavery, but Agnes is not happy. Louisa does her best to help with her demands, including a daily early morning run in Central Park, and waiting outside an artist's studio with Garry, their chauffeur, whilst Agnes learns to paint, but strangely, never brings any paintings home.
At one of the many charity functions that the rich and famous attend in New York, Louisa falls for Josh who is gorgeous and kind, but is it because he reminds her so much of Will?
But then, she is dismissed by Mr Gopnick for something she did in all innocence to help Agnes. Whilst back in England, Sam gets an attractive new partner to work with who seems to be taking Louisa's place in his heart.
How can she stay in New York with no job? Yet, how can she go back to Sam?
This is another wonderful book by Jojo Moyes with a cavalcade of characters like Mrs De Witt and her dog, Dean Martin, who lives on the same floor in the apartment block and who hates Agnes' piano playing; Ashok, the kind and helpful porter at the Lavery; Ilaria, the Gopnicks' cook, and Garry who learns Spanish whilst they wait for Agnes in the car.
Jojo Moyes also describes New York so well, it makes you want to jump on a plane and walk through Manhattan singing Let the Rivers Run, just like Louisa.
And yes, she still wears those tights that are striped like a bee!
Posted by Jean Bull at 08:00

Email ThisBlogThis!Share to TwitterShare to FacebookShare to Pinterest
Labels: 'after you', 'Jojo Moyes', 'Louisa Clark', 'Me Before You', 'New York', 'paramedic', 'still me', 'Will Traynor'