Between A Mother and Her Child by Elizabeth Noble - Emotional, but Uplifting 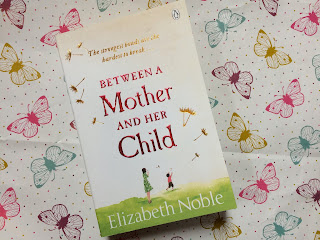 If you are looking for an emotional, but uplifting book to read this Mother's Day weekend, then
Between A Mother and Her Child by Elizabeth Noble is for you.

Maggie met Bill when he was over on his gap year in Australia. She was a champion swimmer with a chance for the Olympics, but when she became pregnant, they married and returned to the UK where Jake was born.

Life was beautiful: they had two more children, Aly and Stan, and Bill's building business was going well. Then shockingly, when Jake was on his gap year with two friends in Thailand, he drowned in the Boxing Day tsunami.

The fact that this happens before the novel starts doesn't lessen the heartbreak for Maggie and Bill who deal with it in their different ways; she staying at home to try to come to terms with Jake's death and he going out to Thailand to find his body and give help to the people there in any way he could.

Kate has her own problems. In her sixties, she now lives alone, her life once so full of colour, is now monochrome. And it is Livvy, Maggie's younger sister, over from Sydney for Christmas, who suggests that she finds a 'companion' for Maggie now that Bill has moved in with young widow, Carrie, who he's met at his bereavement group, and who finds Kate through an advertisement.

It was intriguing to find out if Maggie would accept Kate and what impact she would have on Aly, aged seventeen, doing her 'A' Levels, but increasingly withdrawn since her brother's death, and Stan, aged ten, who suffers from dyslexia and dyspraxia and who is a challenge at the best of times.

Elizabeth Noble tenderly explores the relationships between all the characters, drawing a vivid picture of each one, but concentrating on the one between Maggie and Jake which is at the heart of this novel. It is emotional, but it is uplifting, and I was hooked until the touching end.
Posted by Jean Bull at 08:00