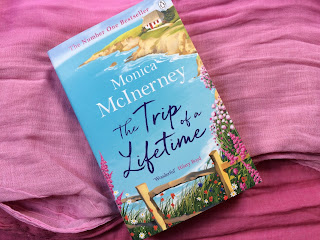 I am a real sucker for an attractive cover, and very often I'm proved right, and I really enjoy the book.
The Trip of a Lifetime  is one of those that caught my eye. I hadn't heard of Monica McInerney before, but looking over that wooden fence, surrounded by pink flowers to the cottage on the rocky shore, I knew I was going to love it, and I did.

Lola Quinlan, an eccentric, enigmatic and colourful eighty-five year old, left Ireland for the Clare Valley in Australia over sixty years ago. For all those years, she has kept a secret from her family, and now it is time to go back home and face her past.

She takes her granddaughter, Bett, who really can't afford the time away from her job, as editor of the local newspaper which is under threat of closure, or away from her husband, Daniel, and their toddler twins, Zachary and Yvette. Lola also takes Ellen, the daughter of Bett's sister, Anna, who died when Ellen was younger. However, I love the scenes when Lola deals with this typical thirteen-year-old in a loving, amusing and effective way, especially when Ellen is obsessed in keeping up with her friends on her iPhone.
Bett has another sister called Carrie, who would have loved to have gone to Ireland too, but is heavily pregnant with her fourth child, and who occupies herself whilst Bett is away as a self-appointed blogger on the forthcoming TV murder mystery which is going to be filmed in the vineyards of the Clare Valley.

This is a wonderful sweeping story about the Quinlan family, and a cast of wonderful characters like Des, the talkative chauffeur, who bring it all to life, and Jim, Lola's son, who is still the apple of her eye.

I really enjoyed this book and I will certainly read Monica McInerney's other novels about Lola and her family: both with irresistible covers!!

Email ThisBlogThis!Share to TwitterShare to FacebookShare to Pinterest
Labels: 'choosing a book by its cover', 'Ireland', 'Kildare', 'Monica McInerney', 'The Trip of a Lifetime', Australia', Clare Valley'