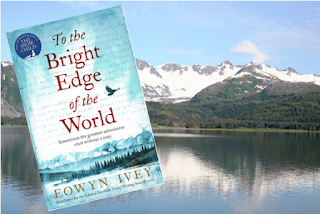 To the Bright End of the World is Eowen Ivey's second brilliant novel set in Alaska, which I loved just as much as her first. (You can read my review of The Snow Child here).
As I read this fictional account of a real expedition northwards along the Copper River to the Yukon to survey the land for the US government, I could sense the rush of the melting Wolverine River as it sped past me through the towering snowy mountains and the deep granite gorge.

Told in a scrapbook style with diary entries, photographs, drawings, letters and newspaper cuttings, I followed Lieutenant-Colonel Allen Forrester, Lieutenant Andrew Pruitt, and Sergeant Bradley Tillman with their helpers, Samuelson and Boyd, two trappers who know the terrain, and Nat'aaggi, an Indian woman, through the dangerous valley populated by the Midnoosky Indians, named by the Russians on a previous disastrous attempt to find a way through to the Yukon,

The main diary entries are those of Allen and his wife, Sophie. He tells of the responsibility of leading his men through such tough terrain and the difficulties they are encountering, whilst she tells of her frustration of becoming pregnant and being forced to stay behind at the Vancouver Barracks. She had been desperate to accompany him on the greatest exploration since Lewis and Clarke crossed the Great Divide, but is left attending tea parties with the other gossipy and nosy army wives. However, she sadly loses her baby, and knowing it's months before Allen's return, she teaches herself photography, helped by her Irish maid, Charlotte, to focus her mind on something else.

One of the most poignant aspects of the novel is that structurally there is a time gap between the letters Allen sends to Sophie, and her to him, due to relying on the Indians to convey them to the coast, illustrating their frustration, and the fact that their news was therefore months old.

I also very much enjoyed the present day correspondence between Allen and Sophie's great-nephew, Walt, and Josh, the young curator at the Alpine Museum, Alaska. Walt sends a letter, in advance of sending Allen and Sophie's letters, diaries and other artefacts from the expedition in the hope that the museum will accept them and put them on display. It all starts off very formally, and then the relationship between the old-timer and the young curator develops as they get to know each other better and learn more about each other's life.

One theme in the book is birds, for example, the raven, and also the hummingbird: one of the Midsookies is a mysterious raven-like old man with a top hat; and Sophie's aim as a photographer is to take a picture of some hummingbirds in a nest. Another theme is light, reflected in the title, and a special sort of light that Sophie is searching for in her photography after seeing the marble bear that her father sculpted in the forest seemingly come alive with the setting sun.

This is a totally engrossing novel: it's totally captivating to discover whether Allen and his men will make the five hundred miles up the river before the ice melts, through the canyon, and over the mountains, and then another thousand miles to the ship that will take him home again to his beloved Sophie.

Email ThisBlogThis!Share to TwitterShare to FacebookShare to Pinterest
Labels: 'Alaska', 'Eowyn Ivey', 'exploration', 'The Snow Child', 'To the Bright Edge of the World', 'Yukon'