The Place We Met by Isabelle Broom - A Great Read for Cold, Dark January Days and Nights! 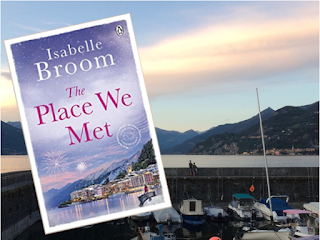 If you've read my blog before, you'll know that I like to read novels set in the places I've visited. Therefore, I loved The Place We Met, the latest book by Isabelle Broom, especially as it's set around Lake Como, Italy, where I spent a wonderful few days in September.

Taggie works at the Casa Alta Hotel near Como, it's nearly New Year's Eve and her big chance to make her name by putting on a big party and achieving her dream of becoming an events organiser; however, there a heartbreaking event in her own past that she's finding hard to forget.
Then, when she visits her secret beach by Lake Como, and slips into the icy water, strong, gorgeous Marco lifts her out, but is a new love interest what she really wants, or needs?

Lucy treats her boyfriend, Pete, to a New Year's break at Lake Como. She's not usually spontaneous, but surely a few days in such a romantic spot will help their relationship, especially after she finds a shoebox full of photos of a glamorous woman at the back of his wardrobe, and he receives some phone calls that he won't tell her about.

The story is told in turn from Taggie's and Lucy's point of view as the plot thickens and their lives intertwine.

For Isabelle Broom, the lake is an integral part of the novel, another character reflecting the emotional highs and lows of the girls as they come to terms with their past and move forward into the New Year.

I think that this New Year, it's a great read for all these cold, dark January days and nights. 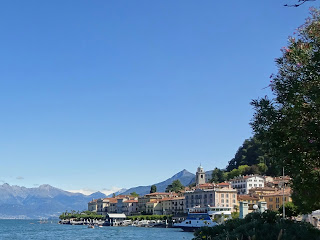 (Look at my photo of Bellagio, it's almost the same as the cover of the book, but lots warmer!)