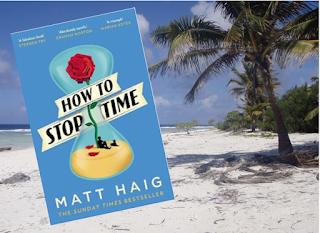 As I have said many times before, I love quirky books about time travel. For example, The Time Traveller's Wife, The Forgetting Time and The Comet Seekers, not forgetting my all time favourite, Tantalus: The Sculptor's Story.
But in How to Stop Time, Matt Haig doesn't just take Tom Hazard back in time to observe how life was then; he takes Tom back through his own life, because although he only looks about forty, he is really well over four hundred years old.

Briefly: born in France in 1581, Tom and his mother flee to England because of the persecution of Huguenots, and settle in Suffolk. However, when the villagers notice that he is not getting any older, she is tried for witchcraft and drowned in the River Lark. He leaves for London and anonymity and falls in love with Rose, a fruit seller, and they have a daughter, Marion, who is an alba like her father: someone who doesn't grow old, and he hasn't seen her since the day he left them in 1617 to protect them both from being discovered.

The novel starts in the present where Tom is about to begin a teaching job in East London, and he visits the places that meant so much to him and Rose, and the story moves backwards and forwards through his memories and key paces that formulated the man he is today.

One key figure in his life since 1891, is Hendrich who has set up The Albatross Society (named because it was believed that albatrosses lived for ever) to protect people like them from the mayflies (ordinary people with ordinary lifespans) who could use the albas for scientific experiments. One rule of the society is that members cannot fall in love in fear of being discovered, and that they must move every eight years with Hendrich finding them a new identity. In return, Hendrich says he will help Tom find Marion.

As Tom's life unfolds, we discover that he has met Shakespeare and Scott Fitzgerald, seen Tchaikovsky conduct, and has also travelled to New York, Paris and the South Seas.

It is a philosophical journey, illustrated by the words of Montaigne, the French philosopher, whose work Marion quotes from the age of eight. Also interestingly another character is introduced called  Sophie. I wonder if this is in honour of the Sophie in Sophie's World by Jostein Gaarder who makes her own philosophical journey?

It's a gripping and entertaining story as we follow Tom back and forth: seeing if he will ever fall in love again; finding out whether he will be reunited with his daughter, Marion, and getting a glimpse of what his future might be. I can thoroughly recommend it. I could not put it down!