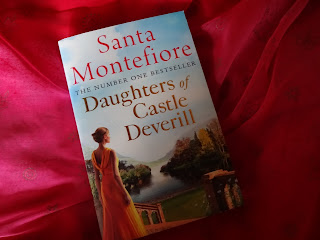 The Daughters of Castle Deverill by Santa Montefiore is the second part of a trilogy about Kitty Deverill, her cousin, Celia, from England, and Bridie, the cook's daughter: three girls who spent idyllic summers together at Castle Deverill on the west coast of Ireland in Songs of Love and War. (You can read my review here)
It is now 1925, and after a catastrophic fire which destroyed the castle, Celia has bought it and intends to rebuild it and make it grander than ever it was; Kitty has married her tutor, Robert, and is bringing up, Little Jack, her father's son with Bridie who has fled to New York and made a fortune marrying an elderly rich man.
So now, Celia has the castle at last; Kitty pines for Jack O'Leary (the man that she and Bridie both loved) who has also gone to America; and, although she's now very well off, Bridie yearns for her son, Little Jack.
Set against the Stock Market crash of 1929 which changes everyone's fortunes, this is another of Santa Montefiore's sweeping stories that she does so well, and I was totally immersed in its depth and breadth. It takes place from the west of Ireland to London, New York and the diamond mines of South Africa. It is romantic, atmospheric, yet also tragic and shocking.
This book also reveals more about the first Lord Barton* Deverill arriving in Ballinakelly to claim his lands (bestowed upon him by King Charles II, for his support to the Crown) and his relationship with Maggie O'Leary, who puts a curse on him and his heirs that their spirits will never rest from their wandering until an O'Leary owns Castle Deverill again.
It is through this curse that we see Kitty Deverill's ancestors, from the raging Barton, to her much missed grandmother, Adeline, a bit like a Greek chorus, observing the family's celebrations and, commiserations.
Told from many points of view, it's a magnificent sweep of a novel and the final part, The Last Secret of the Deverills is out now.

*In her introduction, Santa Montefiore tells how she chose Barton's name from the village sign along the A303 for Barton Stacey. I've often thought it would make a good name for a character, and she's beaten me to it!
Posted by Jean Bull at 08:00

Email ThisBlogThis!Share to TwitterShare to FacebookShare to Pinterest
Labels: 'Ireland', 'London', 'New York', 'Santa Montefiore', 'Songs of Love and War', 'South Africa', 'The Daughters of Castle Deverill', 'The Last Secret of the Deverills'