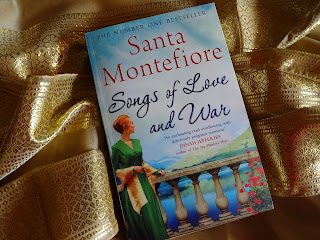 This story could so easily be about three girls, Kitty, Bridie and Celia, who spent wonderful summers at Castle Deverill, County Cork, and grew up and found the most loving and suitable husbands, had lots of children, and lived happily ever after. But it's not!
Santa Montefiore has written a fabulous tale in Songs of Love and War of the friendships and rivalries of the girls, set against the Irish uprising at the beginning of the twentieth century.
Kitty, the granddaughter of Adeline, Lady Deverill, and her husband, Hubert, Lord Deverill, lives a privileged life, but is shunned by her mother, Maud, who favours her elder sisters, Victoria and Elspeth. She is shocked to discover that her father, Bertie, is having an affair with the beautiful Grace who becomes involved with the aggression towards their Anglo-Irish family.
Kitty considers herself as Irish as Bridie Doyle, the daughter of the cook at the Castle, and they slip away together to play in the gardens with Cousin Celia who arrives each year to spend the summer in Ireland. But their happiness doesn't last as Kitty and Bridie both fall in love with Jack O'Leary, the vet's son.
Castle Deverill has a curse that the male heirs of the Deverill family will have to haunt the castle as ghosts (which Kitty and her grandmother can see) until an O'Leary owns the castle again. So apart from the fact that Jack's Irish and not of the same class as Kitty, she knows that her father would never allow them to marry.
The story follows the girls through the Easter Rising which has a tragic effect on the Deverills and their castle, and into their twenties. As they grow up, they move further apart, but they never lose their love for Castle Deverill and the memories that they made there.
This book is the first of a trilogy, and I can't wait to read the rest!

Daughters of Castle Deverill is out now.

Email ThisBlogThis!Share to TwitterShare to FacebookShare to Pinterest
Labels: 'Anglo-Irish', 'County Cork', 'Daughters of Castle Deverill', 'Ireland', 'Santa Montefiore', 'Songs of Love and War', 'The Last Secrets of the Deverills'