The Villa by Rosanna Ley - Read it for Sheer Pleasure! 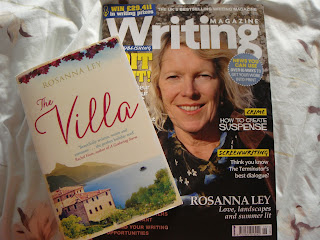 I know that you shouldn't judge a book by its cover, but the covers of Rosanna Ley's books entice me to pick them up, and I can't resist!
I bought Bay of Secrets last summer because of its beautiful cover, but I didn't get round to reading it. However, when Rosanna was featured in Writing Magazine (June 2015), I decided to read all her four novels, starting with The Villa (her first), and I wasn't disappointed!
The article talked about her skills at 'writing multi-stranded epic romance' where 'place and story are inescapably intertwined', and this is just what she's done in The Villa.
It tells the story of Tess, who inherits a villa in Sicily from an mysterious benefactor; her problematic daughter, Ginny, who flunks her A Level exams on purpose so she doesn't have to go to university; and Tess's mother, Flavia, who left Sicily at the age of seventeen, never to return.
Sicily takes centre stage when Tess visits the island for the first time to find out why she's been left the Villa Sirena. Family feuds and tales of murder and deceit concerning the mystery of Il Tesoro, the treasure that the villa is supposed to hide, bring her into contact with Giovanni Sciarra who is very interested in her, but is it for the right reasons? Then there is also the mosaic artist, Tonino Amato, dark and moody, yet he's bothered about her diving alone in the sea. . .
Tess leaves Ginny with her parents, and things seem to be going well until Ginny's father, David, turns up after leaving Tess when she became pregnant all those years ago to go to Australia. (I love Ginny and her alliterative exclamations: 'meandering meerkats' to give just one!)
Running alongside Tess's story, is Flavia's own which she writes down in a notebook, interspersed with recipes, as she's never been able to tell Tess, or even her own husband, Lenny, the whole truth about why she left her Sicilian home and family, after the war, to live at first in smoggy, cold November London.
Throughout the book, the colours and moods of the Sicilian landscape reflect the action in the story and I think it would be a perfect novel to take on holiday, or read for sheer pleasure!