The Oyster Catcher by Jo Thomas is a Pearl of a Book! 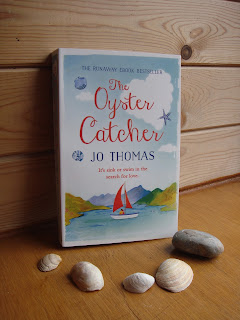 I can thoroughly recommend The Oyster Catcher by Jo Thomas. Published originally as an ebook in 2013, it was a runaway success and was then published in paperback in 2014, winning not only the prestigious RNA Joan Hessayon award for a newly published writer, but also the 2014 Festival of Romance Best Ebook Award too.
I heard of it through the RNA and have been keen to read it for some time, and I wasn't disappointed!
After a disastrous wedding, when Fiona's husband runs off, and she crashes the honeymoon camper van, she is left wearing only her wedding dress in Dooleybridge, County Galway. Her salvation comes in the shape of Sean Thornton who takes her on to help on his oyster farm. Through Jo Thomas's hilarious descriptions, I see Fi as a sort of Bridget Jones in Sean's oversized boots and waterproofs, and Sean himself as a brooding hero, with perhaps a bit of Ross Poldark about him although it is set in twenty-first century Ireland, not eighteenth century Cornwall!
There is a whole cast of village characters too including Margaret, the barmaid who has terrible fashion sense, but who becomes Fi's friend.
Dooleybridge has declined into a quiet backwater since it's waters were declared unclean for oyster production after the Murrays sold their oyster farm for building on the shore. However Sean proves that the waters are now pure, and wants to make a success of his farm, but he is hampered by oyster pirates who steal his stock when Fi is left in charge. So to help Sean, she becomes involved in reviving the legendary Oyster Festival to bring business to the village, and their love/hate relationship becomes the backbone of the story.
This is all complicated by the arrival of Dan Murray, a famous American broadcaster, who has come to make a TV programme about finding his roots, and has his eye on Fi; and also Nancy, Sean's girlfriend, a restauranteur who has her own ideas about the Festival.
Jo Thomas actually did her research on a Scottish oyster farm, going out into the sea to collect the oysters and prepare them for market, and I think she has done a really good job in making Fi's attempts at working at Sean's oyster farm so believable.
Interestingly, The Oyster Catcher is written in the first person present for Fi, and in other chapters, in the third person past for Sean, but it definitely works.
So whether or not you like oysters, this is a pearl of a book for you!
Posted by Jean Bull at 10:57