A Fabulous Day Out at a Woman's Weekly Fiction Workshop! 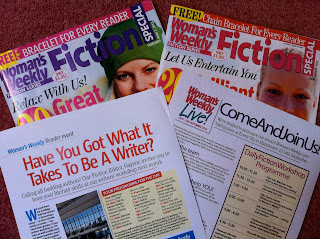 I was really lucky to get a place on the Woman's Weekly Fiction Workshop which ran yesterday at the amazing Blue Fin Building in Southwark. 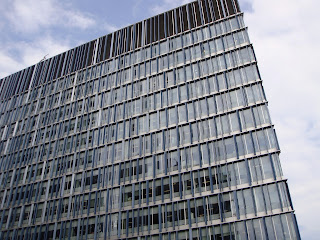 I felt quite nervous arriving on my own, but I'd been in contact with Cara Cooper and Wendy Clarke and knew they would be there (even if I didn't get much time to talk to them in the end!)
However, I needn't have worried because we were given a warm welcome by Gaynor Davies, Woman's Weekly Fiction Editor; Mary Bird, Head of Marketing; and Suzanne Ahern, a well-loved Woman's Weekly serial writer. Soon thirty eager writers were sitting around a table strewn with copies of Woman's Weekly Fiction Special, sweets and biscuits and cups of tea, coffee and water. Some people had already had stories published in the magazine and Fiction Special; I hadn't, but was hoping to pick up some tips.
Gaynor started with a welcome and a talk about 'Writing for the Woman's Weekly Audience'. She said that some stories they received were too old fashioned because of the perceived image of the magazine,
and in fact they had readers of all ages which include some men as well! Not wanting to spoil her talk too much, if you are lucky enough to go to one, she also gave good advice about conflict, character and plot and we were asked to write an attention-grabbing opener which we had to share with the group! I found that quite hard, because I'm not a very spontaneous writer. Anyway, Gaynor was very pleased with everyone's efforts, thank goodness!
Then Suzanne gave a talk about 'The Art of Serial Writing' which is something I'd never considered before. A Woman's Weekly serial can be in three, four or five parts, each about 3,300 words long, so a three part serial would be about 10,000 words. Longer than a story, but shorter than a novel. She also talked about character, plot and point of view, and we did an exercise as a group to plan a serial with the essential cliff hangers to keep the reader hooked. 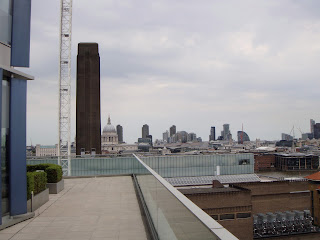 We had lunch in the 11th floor, Blue Sky Café, and went out on the terrace to marvel at the rooftops of London and St Paul's Cathedral around the tall tower of the Tate Modern!
Before, Laura Longrigg, joint Managing Director of the MBA Literary Agency, gave her talk, Diane Kenwood, Woman's Weekly Editor, popped in to see how we were getting on and seemed very impressed at our industry!
Laura talked to us about the job of being a literary agent, and how to find one. Also about the importance of being able to describe your book in one sentence, and what agents are looking for at the moment.
It was a fabulous day, and I was sorry when it was over. There will be more workshops this summer and a series of them at Woman's Weekly Live in Manchester on 12th-14th September. I'd love to go to one of them because they have Jane Wenham-Jones, a regular and entertaining contributor to Fiction Special, and short story expert, Della Galton, as speakers! For more information visit the Woman's Weekly website here, and I hope you will have as wonderful a day as I did!
Posted by Jean Bull at 15:35