Snuggle Down with Happily Ever After by Harriet Evans 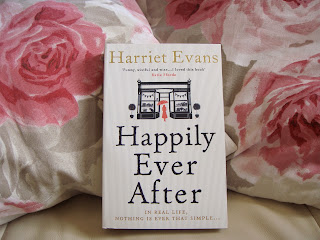 As I've said before on my blog, my claim to fame with Harriet Evans was meeting her one year at The London Book Fair Get Published seminar. She was there as a publisher and an author promoting her first novel, Going Home and when she signed it for me, I told her that my first novel was called Going Away!
She had originally submitted hers under a pseudonym so no one would know it was her, but it was accepted and so successful that so far she has written five more.
(Going Away was reborn as Gipsy Moth when I found out about Haldon Aerodrome near Teignmouth and Amy Johnson flying to Australia in 1930.)
I enjoyed Happily Ever After. The story is about about Eleanor, or Elle, Bee and her career in publishing (which I guess was based on Harriet's own experiences in the industry); Elle's love life, i.e. a succession of gorgeous men; and her dysfunctional family. It also deals with the problem of alcoholism, and the troubles caused by trying to ignore it in yourself and in other people.
Harriet draws a vivid picture of the traditional publishing house where Elle goes for her first job, and the characters who work there, especially Felicity Sassoon, who owns it, and her son, Rory.
Elle so wants her life to turn out 'happily ever after' like in the romances she reads, especially the books which Harriet explains in her Note from the Author are her own favourites e.g. Georgette Heyer and Dodie Smith.
I thought it was altogether a well-written, great read, and I was rooting for Elle to sort out her life all the way.
Which is your favourite Harriet Evans book?
Posted by Jean Bull at 19:59