The Girl You left Behind - Another Excellent Read from Jojo Moyes 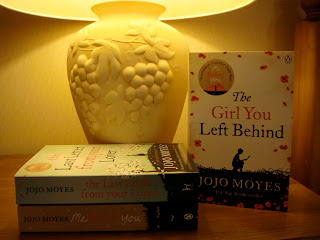 This year I've read three excellent books by Jojo Moyes. She's such a wonderful writer and totally immerses you in the time, the characters and the story.
The Girl You Left Behind is about two women. Firstly, brave Sophie who runs a bar in a village which has been occupied by Germans in northern France during the First World War, and secondly, Liv, a hundred years later, whose husband gives her a portrait of Sophie shortly before he dies.
The portrait is also known as The Girl You Left Behind, and the novel tells how the painting came  to be in German hands; the love of Sophie for her husband, the artist, who was a prisoner of war;  and how Liv fights to keep it when the family of Sophie's husband tries to get it back.
The section about France reminds me of Five Quarters of the Orange by Joanne Harris which I have read many times,  although it is set in the Second World War.
Of course, there's love interest for Liv in the form of Paul, a former New York policeman whose job it is to trace paintings and return them to their rightful owners. But who is the rightful owner? And what is Liv prepared to do to keep the painting that means so much to her?
This was a totally fabulous read that kept me hooked until the end.
Which is your favourite Jojo Moyes book?
Posted by Jean Bull at 15:02

Email ThisBlogThis!Share to TwitterShare to FacebookShare to Pinterest
Labels: ' Joanne Harris', 'First World War', 'Five Quarters of the Orange', 'Jojo Moyes', 'The Girl You Left Behind'