the Last Letter from your Lover by Jojo Moyes should NOT be made into a movie! 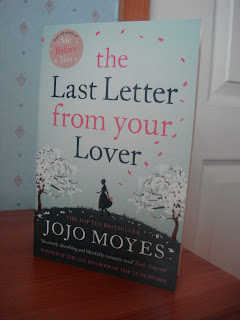 the Last Letter from your Lover by Jojo Moyes should NOT be made into a movie! Not that I think anyone is planning to at the moment. But if they are, it should be made into a television drama serial instead, so we can sit back and enjoy every emotional romantic moment and precious detail all over again, (with a box of man-size tissues) rather than squash it into an hour an a half.
The Daily Telegraph calls it 'An utterly absorbing and blissfully romantic read', and I would totally agree.
It is the story of two women, Ellie, a reporter in 2003, who is in love with an unobtainable married man, and Jennifer, in 1960, married to an eminent businessman, but who has a secret lover.
Jojo draws the characters and their time so well, rather in the style of Daphne du Maurier. I can see Jennifer as an elegant woman, trapped in the conventions of the lingering post war period, when all women could do in her situation was to literally keep calm and carry on, that is, of course, until they have to make a choice and risk having the scandal of their failed marriage spread all over the papers.
Ellie is a modern woman with her own job and flat, but the choices for her have not got any easier over the years. The Last Letter is the thing that binds these two women together towards a dramatic conclusion.

I've only read one of her other books and that was The Ship of Brides. I lent it to someone going on a trip to Australia and never got it back, so they must have loved it as much as me!
Have you read any of Jojo's books?

PS It is interesting how there is more than one cover design for her books. I wonder why?
Posted by Jean Bull at 07:30

Email ThisBlogThis!Share to TwitterShare to FacebookShare to Pinterest
Labels: 'Jojo Moyes', 'The Last Letter from your Lover', 'The Ship of Brides'