I've been watching the London Olympics! 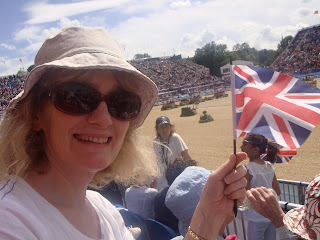 Way back in 1976, a girl at work told me that she was going to take the next two weeks off to watch the Montreal Olympics. I thought that she was mad. . .
But as I write, I'm waiting for the Closing Ceremony, and I'm rather sad that this wonderful fortnight is over.
It was so compulsive: I even watched Nicola Adams win her gold medal at boxing, something I wouldn't normally do, but amazingly, she was the first woman to win that gold medal and she was British!
Earlier in the Games, Clare Balding did a report on women in the Olympics. I'd always taken it for granted that women could compete against men equally, and I was amazed that the heroine of my childhood, Mary Rand, who got a gold for long jump in the 1964 Games, was the first British female to win one in a field and track event.
Of course, I didn't see every event, but I did get tickets for the Dressage at Greenwich Park, as you can see. I learnt quite a lot about it as I watched, and joined in the celebrations when Team GB won their section.
All the 2012 volunteers were fantastic, greeting us when we arrived, and sending us on our way at the end, not to mention answering any questions cheerfully.
The great thing about having the Olympics in Britain is that everyone has been talking about it from that fantastic Opening Ceremony onwards. It's been rather like Christmas without all the shopping and presents.
What has been your favourite London 2012 moment?