A Home from Home by Veronica Henry - An Amazing Novel That Would Make a Fabulous TV Series! 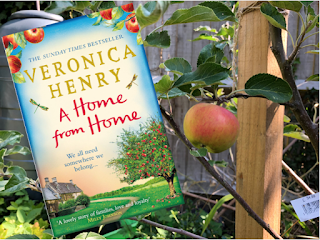 If you are already missing Poldark, then this modern day story about two Somerset families and their two houses split by a disaster that has kept them apart for over a hundred years, might fill the gap in your heart.

The Melchiors have lived at Dragonfly Farm ever since Great-great-grandfather Joseph won it in a game of cards from Casper Culbone. And Casper stole Eleanor, the love of Joseph's life, in revenge.

When Gum, Great Uncle Matthew Melchior, dies after a road accident, his will has great ramifications for Tabitha and her cousin, Georgia, his great nieces, especially when they find that Gabriel Culbone has also been included as a beneficiary, and Dragonfly Farm will be split three ways. How can Tabitha continue to live there and what about her plans to produce a sparkling apple wine from the orchards in honour of her late great aunt, Joy?
Gabriel, too, is shocked to find he's been left a share of the farm that he's never heard of. How can he uproot his partner, Lola, and their daughter, Plum? Does he even want to? He's never heard of these Culbones and he's got enough business problems, as it is.

For thirty years the Culbones' home, Rushbrook House, has been empty, but Dash Culbone has decided to leave his job in the City and carry out some ambitious plans. Unfortunately, he is the one who has to tell Tabitha about Gum's accident because Gum had pulled out in front of him. She becomes attracted to him, but how can she be when he is a Culbone?

Secrets abound in this amazing book with fantastic characters you can really believe in, and several intriguing stories woven together to make a gripping novel. I think it would make a fabulous television series!
Posted by Jean Bull at 07:00