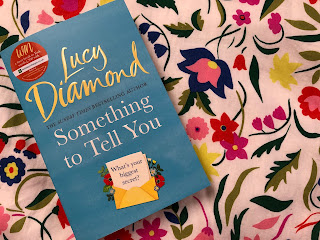 The Mortimers are a large, loving, happy family in York, until Frankie turns up at Harry and Jeanie's Golden Wedding party and says that she's his daughter.
Starting with this bombshell,  Something to Tell You by Lucy Diamond is a gripping story of all the secrets that the family have been keeping from each other which could ultimately destroy their cosy lives.

When Jeanie finds out that Harry's secret daughter was from an affair whilst she was coping with bringing up their four young children, she is heartbroken and goes off on what was meant to be their second honeymoon in Madeira, on her own.

Frankie, this daughter, is an illustrator for a weekly column about family life with a small son, written by her boyfriend, Craig, about his child, Fergus. They live together and he considers Frankie his mother, then Julia his birth mother turns up, making Frankie and Craig realise that they must tell him the truth.

Robyn, the wife of Harry and Jeanie's eldest son, John, finds out that he has been cheating on her too, and has been sacked into the bargain, and is going off to  live in Edinburgh with a twenty-two-year-old student.

Alison, Robyn's mother, has been keeping the secret of her father's death from her. She doesn't go out much, preferring to discuss her favourite TV programmes with an online forum to joining in the Mortimer family's parties and events, until something happens to make her change her mind.

Bunny, second son, Dave's, partner, also has a secret past which she has kept from him after making a new start in York, and again events happen which make her reveal all to him.

The only constant is Paula, Harry and Jeanie's only daughter, until Frankie turns up.
How does she feel about finding out she has a sister?
How can she hold the Mortimer's together?
Will her mother ever come back from Madeira?

Lucy Diamond has written a very clever novel weaving these stories together and keeping me eagerly reading right until the end.
Posted by Jean Bull at 07:00

Email ThisBlogThis!Share to TwitterShare to FacebookShare to Pinterest
Labels: 'family secrets', 'Golden Wedding', 'Lucy Diamond', 'Something to Tell You', 'York'