Sail Away to New York with Celia Imrie - You will have a voyage of a lifetime! 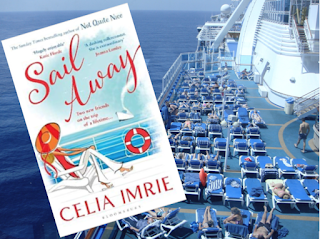 Sail Away by  Celia Imrie takes you on a voyage of a lifetime as two ladies' lives collide when they find themselves on the same cruise ship in dire circumstances.
Suzy, an actress from a 1980s TV show, is offered a job in Zurich in The Importance of Being Earnest, but the show is cancelled before the rehearsals can even start and the cast lose their money, so she gets a job on a cruise ship leaving from Genoa.
Amanda has problems buying a new flat. Her son and daughter are too busy with their lives to help her out, so she finds it just as cheap to take a cruise as to stay in grotty digs, so she sets sail on the same cruise ship from Southampton.
Suzy is on board with Jason Scott, a young actor, who witnessed what went on the night before rehearsals were about to start at Herr Appenzell's flat, but is Jason implicated in the serious crime that was committed then?
Told in a funny and amusing style with lots of interesting background information about the world of the theatre and life onboard a cruise ship, the serious crime, unbeknownst to Suzy and Amanda, links them together.
This is a great mystery with a cast of wonderful characters to read on holiday, whether you are sailing to New York, or not, which keeps you guessing until the end.
This is the first book I've read by Celia Imrie and I'll certainly read her others set in the South of France.
Posted by Jean Bull at 07:03

Email ThisBlogThis!Share to TwitterShare to FacebookShare to Pinterest
Labels: 'Celia Imrie', 'cruise to New York', 'mystery', 'Sail Away', 'The Importance of Being Earnest', 'Zurich', Genoa'