Have you read Number One Best Seller - Love, Iris by Elizabeth Noble? 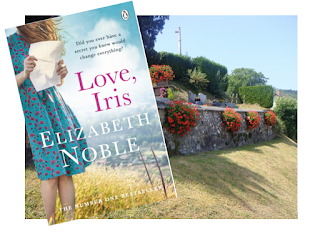 I've read and enjoyed many books by Elizabeth Noble in the past, so when I saw Love, Iris, I knew that I had to buy it!
As its title suggests, it's about love and all its different aspects.
Tess discovers she's pregnant, but her boyfriend, Sean, says that it's not the time to have a baby because he has a fantastic job offer in New York, so feeling that he can't love her if he wants her to get rid of the baby, she leaves him, and all through the book, Tess 'writes' letters to her baby, describing her feelings and telling her how much she loves her instead.
Gigi has a husband, Richard, two grown-up sons, Chris and Olly and a daughter, Megan, at uni. But she feels that her marriage is on the rocks because of Richard's lack of attention and understanding, (do they really love each other?), so she decides to leave him as well to see if life is better on her own.
Iris is Tess's grandmother who Tess has spent so much time with growing up in Salisbury as her mother, Donna, couldn't settle down after Harry left her. But now, Iris is in a nursing home because she has Alzheimer's, and it is there that Tess meets Gigi who still visits Richard's father, James.
Tess discovers that Iris has a secret that she's kept from her and Donna, and which helps them both to look at their lives differently.
Meanwhile, Gigi's daughter-in-law, Emily, is wonderfully supportive, but Olly brings home Caitlin who he hopes to marry, and Gigi feels that she will never fit in at all.
However, when Olly meets Tess at the nursing home, things change for them both.
This is a wonderful novel, packed full of emotion which really does keep you glued to the last page and makes you wish there was more!