A Last Chance to Spend Christmas at the Beach Hut with Veronica Henry! 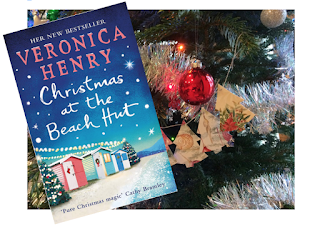 There is still time before the decorations have to come down to spend Christmas at the Beach Hut with Veronica Henry.
I've read so many of her books over the years, including the two other ones about the beach huts at fictional Everdene Sands in Devon, and I loved this one too.
This time, three different people, all with problems that mean they cannot spend Christmas at home, escape to Everdene.
Firstly, Lizzy Kingham, who has just been made redundant, is asked to have her mother-in-law, Cynthia, for Christmas by his ex-wife, Amanda, who is swanning off to the Alps skiing instead of taking her turn. Lizzy is so cross that she walks out of the department store where she bumped into Amanda with the dress she has tried on over her arm, and gets stopped by Security and taken to the manager's office. Then when she gets home, her husband, Simon and eighteen-year-old twins, Hattie and Luke, do not turn up to decorate the Christmas tree because they are too busy at work or seeing their friends. This is the final straw. It makes Lizzy feel that she is being taken for granted and, without all her hard work, there would be no Christmas for them to enjoy. So she leaves them a copy of her Ocado online grocery order and Delia Smith's Christmas for them to do it themselves, and heads off to her friend's beach hut where she and Caroline spent wonderful teenage summers.
Next, along the coast, Harley's mother has moved in with her new boyfriend, Tony, who is threatening Harley, and goading him to fight back so he can prove what waster he is. But he isn't, he's just looking out for his mum and little brother, River, so he too, heads to Everdene where he acts as a caretaker for several of the owners. Caroline is one of these, but has told him that he may stay in her hut if he wants to as, although he's got it ready for their Christmas visit, they won't be coming this year after all.
Lastly, Jack and his young son, Nat, have escaped their families, unable to bear another Christmas without Fran, Nat's mum, who died last December from an embolism, to spend it in the fresh sea air, as far away from the traditional Christmas as they could get in the beach hut next door which has been lent to him by a client.
Lizzy's family are horrified that she's gone and do all they can to find her again so that they can spend Christmas together. Meanwhile, she is spinning her Christmas magic at Everdene and helping Harley and Jack solve their problems.
As always, Veronica Henry gets right into each character, making them really believable, and in reading the book, you find yourself squeezing into the beach hut and sharing a glass of mulled wine with the three runaways as the sea murmurs softly on the sand outside. Fantastic!
Posted by Jean Bull at 14:52