One Thousand Stars and You by Isabelle Broom - a Fabulous Book, in a Fabulous Setting, with a Fabulous Love Affair! 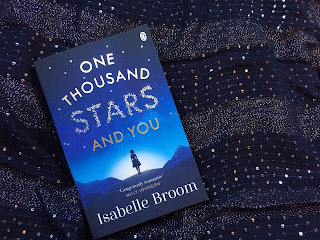 One Thousand Stars and You is a new departure for Isabelle Broom. After a series of wonderful books set in Zakynthos, Andalusia, Lake Como and Prague, she has spread her wings to Sri Lanka! Here, she shows just what a great writer she is with Rosanna Ley's sense of place and Jojo Moyes' sense of empathy.

Alice has always been adventurous and taken risks as a child, but one day, she falls through the greenhouse roof, resulting in a long scar down the side of her face. Her mother can't cope with Alice's injury and blames herself, so she wraps her in cotton wool, but as she grows up, Alice still wants to test herself and still wants freedom. However, to please her mother, she falls in love with Richard, a safe, kind, devoted boyfriend who is also a History teacher. But is he  really the right one for her? To test her frustration, she dives off a high board into a pool, but the guilt she feels because of her controlling mother and her boyfriend's concern, outweighs the thrill of the dive.
With their thirtieth birthdays approaching in April, she  decides to go with her friends, Maureen and Steph, to Sri Lanka on an adventure of a lifetime. Richard and her mother are worried, and well they should be, because the girls meet Max and Jamal.
Max has a prosthetic leg because of an accident with a landmine in Afghanistan, and Jamal was his physio who has become his friend and protector. Steph is enchanted by Jamal, but Alice and Maureen are both attracted to Max. Of course, Maureen thinks she hasn't any competition because Alice has  Richard. Right? Wrong! Alice is getting more and more captivated by Max, and has to question what she really wants in life. This all comes to a head when these two kindred spirits who want to escape their protective, smothering families, climb Adam's Peak and Alice has to reassess her future.
This is a fabulous book, in a fabulous setting, with a fabulous love affair. I loved it and I shall certainly read it again!
Posted by Jean Bull at 08:00