Somewhere Beyond the Sea by Miranda Dickinson - A Romantic, Heartwarming, and Magical Read 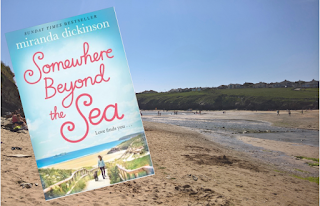 Wow! What a romantic story!
I've just finished reading Somewhere Beyond the Sea by Miranda Dickinson, told in alternate chapters by the protagonists, Seren and Jack.

Seren's father has died, leaving her MacArthur's Gallery, tucked into a tiny courtyard in St Ives, and his vision of saving The Old Parsonage, the former home of Elinor Carne, an astronomer who discovered new stars in the nineteenth century when women's endeavours were ignored and their glory given to their male rivals instead.
Seren is a designer and makes beautiful jewellery out of the seaglass that she finds on her morning wanderings on Gwithian Beach. One day, she discovers an half-finished star, made out of seaglass pebbles, and can't resist finishing it herself.

Jack Dixon is on his own with his daughter, Nessie, now that his wife, Tash, has died. He's a qualified and experienced builder, but he's struggling to find work to make ends meet. He and Nessie live in a beach chalet on a holiday park in return for doing odd-jobs for his friend, Jeb. Each evening, he and Nessie go down to Gwithian Beach and half make a seaglass star, hoping the mermaids will complete it.

When Jack is offered a job by Bill Brotherson to redevelop the parsonage site and turn it into flats, Jack and Seren find they are on opposing sides. Will they ever discover who is making/completing the seaglass stars? Will they ever be able to have a future together if the Brotherson scheme goes ahead?

With her colourful descriptions of St Ives, and the many other characters, I could tell how much Miranda Dickinson loves the place. It's one of those novels that really takes you out of your armchair and transports you to somewhere magical. With its song-title title, it is more like her earlier novels and is a heartwarming, marvellous read. I loved it and I'm sure the story of Seren and Jack, and the beauty of St Ives will stay with me for a very long time. It's almost as good as taking a holiday in St Ives itself!
Posted by Jean Bull at 07:00