The Last Secret of the Deverills by Santa Montefiore - A Wonderful End to this Trilogy! 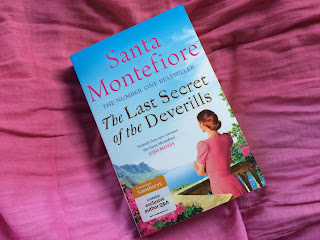 Love and forgiveness are the main themes of The Last Secret of The Deverills by Santa Montefiore. It concludes the fascinating trilogy about Kitty and Celia Deverill and their childhood friend, the daughter of the cook at Castle Deverill, Bridie, who were all born in 1900, and this final instalment takes them up to the 1950s.
Each book has focussed on a different girl, although the stories of the others carry on at the same time, and in this one, it's Bridie.
Also, the story of Maggie O'Leary who put a curse on the first Lord Deverill, after he took their land, that he and his descendants would be confined to roam the castle after death until it is returned to the hands of an O'Leary once again, is played out.
Bridie has returned from New York with her new husband, Count Cesare di Marcantonio to buy Castle Deverill, a place that she has always wanted to make her appear as good as the Deverill girls. Although she doesn't know it, her daughter (who she was told had died at birth leaving her twin brother, JP, to survive) Martha Wallace, has also returned to Ballinakelly to find her birth mother. But she thinks that it is Grace Rowan-Hampton because that's the name on her birth certificate.
On the way, Martha comes across JP in Dublin, who has been brought up by Kitty and her husband, as he was her father's son. They are instantly attracted to each other. What will they do when they find out the truth?
Jack O'Leary, Kitty's childhood sweetheart, also returns to the town, but now he's married. How will Kitty be able to mend her broken heart that she's tried to live with all these years?
There is a wonderfully satisfying conclusion to these stories with love and forgiveness winning over all. But I can't tell you how!
I have loved reading all these books and I'm glad to know that Santa Montefiore is writing another novel about the Deverills, starting in 1885. I can't wait!

Email ThisBlogThis!Share to TwitterShare to FacebookShare to Pinterest
Labels: 'Ireland', 'Santa Montefiore', 'The Last Secret of the Deverills', 'trilogy'