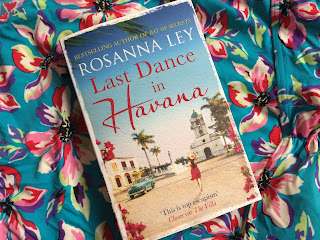 ‘If you’ve been following my blog, you’ll know how much I love Rosanna Ley’s novels; I’ve read four in the past year! So I’m looking forward to reading this one set in Cuba and England from the 1950s to the present day, and enjoying Rosanna’s skill at combining place and the action of the story. This one should be Hot! Hot! Hot!’

That is what I wrote last year in anticipation of reading Last Dance in Havana, and I wasn’t disappointed!

The rhythm of the rumba permeates the story of Elisa and Duardo, who meet at a dance, fall in love, but are forced apart by the political situation in Cuba in the 1950s. Duardo wants to go off and fight for freedom with Castro, and when Elisa is told that he’s been killed, she’s sent to England to make a better life for herself. There, in Bristol, she meets Philip who is kind to her. She marries him, but he will never replace Duardo in her heart. Philip has a young daughter, Grace, who he’s brought up alone after her mother died under tragic circumstances.

In 2012, Philip has become an alcoholic, and Elisa now runs a conversation class for Cubans and other Spanish speakers. Grace is married to Richard, but is unhappy with her career and the fact that he wants to start a family. Theo, a magician, is a good friend of all of them, attending Elisa's class, and spending a lot of time with Grace and Richard, but gradually Grace falls in love with him.

There are many parallels between the stories of Elisa and Grace, not the least as to whether they end up with their true love. And again, Rosanna Ley sparkles in her descriptions of  Cuba and Bristol, really drawing you into the action and making the settings an integral part of the story.

Her next book, The Little Theatre by the Sea, set in Dorset and Sardinia, is due out on June 1st, and I can't wait. Perfect holiday reading!