Do You Want to Write Marvellous Short Stories like Roald Dahl? 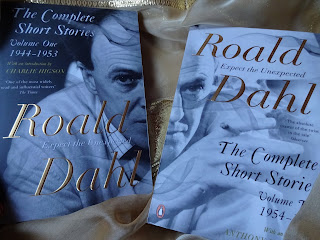 Somehow over the years, I'd lost my Penguin copies of Tales of the Unexpected by Roald Dahl, so I was thrilled to see that the publisher has now brought out The Complete Short Stories  in two volumes, and I was even more thrilled to get them for Christmas!

However, I'm not going to use this blog post to add to the many marvellous reviews of his work, but I will say that if you have read or watched some of his Tales of the Unexpected, they are all here to enjoy again, such as Lamb to the Slaughter, and also others that are not so familiar about his wartime spent in the RAF, e.g. Katrina.
And if you have only enjoyed his children's books so far, there's a whole new world here to explore.
What I would like to tell you about is the introduction to Volume One by the author, comedian and actor, Charlie Higson.
Higson calls Dahl 'quiet simply the master of the short story form' and points out that his stories are not just ones with a twist in the tale which might be read once and not revisited ever again. Dahl knew that he had to hold the reader's attention for literally every second, and Higson says that his words should be carved into the foreheads of every new writer, novelist and critic who thinks that it's the reader and not the writer who should have to make an effort with a story.
He says that Dahl's style is deceptively straightforward, played out in a sunlight which exposes everything it touches. Like the British stiff upper lip, a calm and polite exterior thinly masks the 'seething turmoil' and 'suppressed violence' underneath. However, justice is always served, making us laugh or smile, but it is often the older, darker justice that is also found in his children's books.
Dahl was first approached by C.S. Forester to write a story about being shot down in Libya for a U.S. magazine to gain American sympathy in the war. Forester added that Dahl should focus on detail. This he did, and when Forester received his work, he was so pleased that he called Dahl a 'gifted writer' and published it as it was.
You can read a version this in A Piece of Cake (on page 87), and you will see just how he focused on the detail, e.g. tents flapping 'like canvas men clapping their hands', or the slow conversation between his mind and his body as he tried to escape from his fast-burning Gladiator.
I hope that you will love these stories as much as I did and will think, as you read them, about the skills of the master storyteller who wrote them for us all to enjoy.
Posted by Jean Bull at 08:00