The Girl From The Savoy by Hazel Gaynor - A Rich Story of Ambition, Secrets and Love in 1920s London 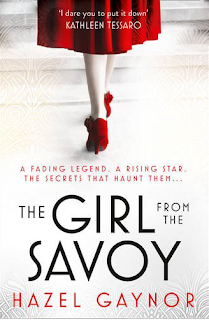 I am a serial book reader: as soon as I've finished one book, I have to start another! It's like travelling in time and space.
No sooner have I left a cosy Oxfordshire Christmas Eve (in How to Find Love in a Book Shop by Veronica Henry) than I arrive on a cold, icy railway station in Lancashire one hundred years ago, where Dolly is saying goodbye to her sweetheart, Teddy, whom she may never see again as he goes off to war. Two pieces of paper are in her pockets: one represents the life she knows and the other, the life she dreams of.
This is from the wonderful prologue to The Girl From The Savoy by Hazel Gaynor. I have really loved and enjoyed her previous two books, The Girl Who Came Home, and A Memory of Violets (you  can read my reviews here and here) so I was excited to read this one at last.
Dolly's dream is to be on the West End stage like her idol, Loretta May, so she gets a job as a chambermaid at The Savoy to be in London so she can attend auditions and hopefully get a job in the chorus line and work her way up. One day she literally bumps into Perry, sending the pages of music he's written all over the pavement. He doesn't think his music is worth saving, and throws it in a bin, only for Dolly to rescue it and hide it under her pillow because she feels drawn to him in some way.
Loretta, the Darling of the West End, meets up with her brother, Perry, each Wednesday afternoon for tea at Claridges, but however much she enjoys seeing him, she can't quite get herself to tell him her intimate secret.
Meanwhile Teddy, has been so traumatised with the war in France, that he's lost his memory, and a nurse at the hospital helps him in an effort to get his memory back by reading Dolly's letters.
At the same time, Dolly has her own secret which she keeps close to her heart but which is always there in her thoughts and dreams.
Hazel has written such a wonderful book, rich in the lives of people in the 1920s: Dolly at The Savoy glimpsing the glittering guests; Loretta and her life on and off the stage; and Teddy struggling to  remember who he is and forget the horrors of war in a stark Lancashire hospital.
It is a book about ambition, secrets, love, and the Jazz Age. Another world, perhaps, but only less than a hundred years ago. 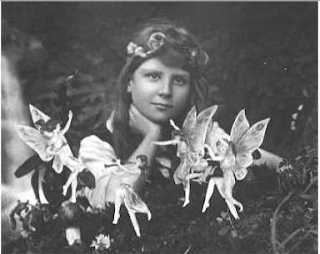 Hazel Gaynor's next book, set in 1920s Yorkshire, is about the Cottingley Fairies and the two young cousins, Elsie and Frances, who maintained that their photographs of the beautiful creatures were genuine. I've always been fascinated about this story which should be out in Spring 2017, and I can't wait!
Posted by Jean Bull at 08:00