A Memory of Violets by Hazel Gaynor - Captivating and Wonderfully Written 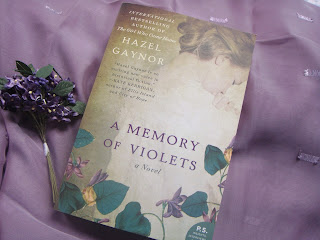 I so enjoyed reading The Girl Who Came Home by Hazel Gaynor earlier this year (review here) that I wondered how on earth she could follow it.
Well, she has, in A Memory of Violets which is just as captivating and as wonderfully written!
Set in 1876, it tells the heartbreaking story of two sisters, Flora and Rosie Flynn: one crippled and the other blind, bound together by poverty, surviving only by selling posies of violets and watercress around Covent Garden to those who will buy them.
But set also in 1912, it tells the story of Tilly Harper who escapes her past in the Lake District and comes to London to work at Mr Shaw's Training Home for Watercress and Flower Girls: a refuge where the girls are given a start in life, with clean living conditions, clean clothes, good food and training in making artificial flowers which are sold to help them earn a living.
There, Tilly finds Flora's notebook, and learns that one day Rosie slipped from her grip along crowded Westminster Bridge, and she has never given up trying to find her.
Tilly decides to try and find out what happened to Rosie, and at the same time discovers how to come to terms with her own past.
Hazel Gaynor is a very talented writer who can immerse the reader right into the heart of the story. I felt I was there beside Flora and Rosie in their bare feet and ragged clothes selling their posies in all weathers; and I was also there with Tilly in the bracing sea air at Clacton, where the younger girls were sent to the orphanage until old enough to learn how to make the flowers, as she fell in love with one of Mr Shaw's nephews (I won't say which one!).
There is so much to say about this book. It's visually beautiful with different flowers decorating each section and chapter. I would love to see a full colour edition, like a Victorian book of flowers, but I'm sure it would be too expensive. Hazel also manages to give many female characters the name of a flower, without distracting from the story, but hinting at the part each plays in it.
Her next book is out next September 2016. Set in the 1920s, The Girl From The Savoy is about a girl who rose from being a maid at The Savoy hotel to being a West End star. I can't wait!

Email ThisBlogThis!Share to TwitterShare to FacebookShare to Pinterest
Labels: 'A Memory of Violets', 'Covent Garden', 'Hazel Gaynor', 'The Girl From The Savoy', 'The Girl Who Came Home', 'Watercress and Flower Girls'