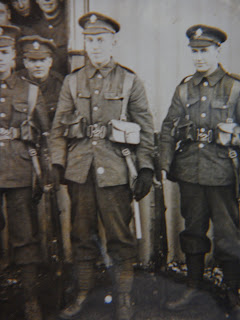 Great News! I was shortlisted to the final judging stage in the Writer's News Short Story Competition on the theme of Optimism. I know that I haven't actually won but, as I said before, it really boosts my confidence which is important because another magazine submission boomeranged its way back to me yesterday, and I was all for giving up.

The First World War soldier in the middle of the photo is my father, and I based my story on the actual events of the day he was shot in October 1918. Of course, he survived, or I wouldn't be here, or I would be nearly 100 years old . . .
He 'plays' Will Walker in the story which I also based on the nicknames that soldiers gave each other at that time, so therefore, he's called 'Johnnie' for Johnnie Walker whisky. The name I like best is 'Smudger' Smith ( I think that this comes from the smudges that blacksmiths would get on their faces from the coals and ash). Anyway, Smudger is my optimist in the story called Toot Sweet. Perhaps that's him peering over my dad's shoulder, he looks a bit of a likely lad.